What Happened After My 13-Year-Old Son Joined the Alt-Right
- The story of one family's journey as they watch their son descend into extremism. There are important lessons here about how justice, dignity, and respect influence individuals' beliefs. We adopt the beliefs of the people we surround ourselves with, and we surround ourselves with people who make us feel good.

95%-ile isn't that good
- What does it take to be a top 5% performer in a field? Not much, says Dan Luu. Skill development probably has a pareto distribution The 80/20 rule, also known as the pareto principle, describes the concept that 20% of a population drives 80% of the results.. Anecdotally, after spending just 10 hours studying chess strategies, I could fairly easily defeat players who knew the rules of the game but hadn't spent time on strategy.

Things I Learned From Five Years in Climate Tech
- The author left his job as a software developer at Twitter to search for job opportunities building green technology, and wrote up some of the biggest lessons he has learned on that journey. I think the key takeaway here is that technology isn't going to save us - we need to influence human behaviour. 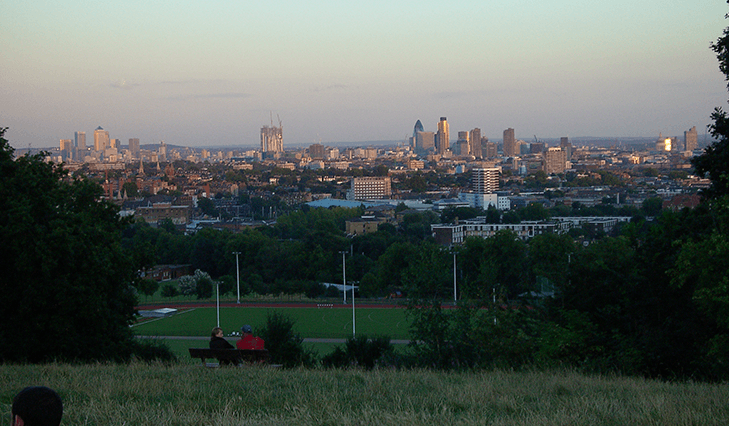 A view of London from Hampstead Heath. Photograph by Chesdovi. The invisible city: how a homeless man built a life underground
- Many people have fantasies of building a hidden cabin somewhere to escape from society - a dream that likely leapt to front of mind in 2020 - but this story is of a man who built himself a hidden shelter in the north of London, underneath Hampstead Heath

Finally We May Have a Path to the Fundamental Theory of Physics… and It’s Beautiful
- This year, physicist Stephen Wolfram presented a simple set of mathematical principles that he posits could be a fundamental theory for how the universe works. I can't comment on how true that may be, but the principles presented describe simple processes with surprising and complex results, and at the very least form a beautiful mathematical toybox.

Ask Culture and Guess Culture
- Our relationship with the word "no" and culture around refusals and denials can be surprisingly complicated, and it's all further complicated because different people have different expectations. This article presents an interesting model for thinking about how people ask for things from each other.

The Hard Part of Learning a Language
- This year I had a project to rewrite the code that powers this website and turned to the language Go. Learning the syntax is fairly straight-forward but I ended up becoming annoyed with the process because of things that were important to know but that nobody had spent the time to write about in one place. This article beautifully summed up the concepts that most computer language tutorials overlook.

Stop Taking Regular Notes; Use a Zettelkasten Instead
- Note taking is a critical element of learning Note-taking: A Research Roundup , but traditional journals have limitations that can be frustrating for those accustomed to the searchability and mutability of digital tools. If you find the idea of a Zettelkasten intriguing, The Zettelkasten Method would be a good article to read next. Zettelkasten is a method of note-taking that brings hyperlinking and endless editability to hand-written notes.

Why Tacit Knowledge is More Important Than Deliberate Practice
- Reading a book to learn how to do perform a task is a good starting point, but the learner needs to spend time actually performing the task before things really start to "click". The knowledge that comes after experience is the "tacit" knowledge. But are there truly tasks that can't be described and only learned through action?

The Lucrative Art of Chicken Sexing
- A chicken sexing is the job of identifying the gender of chick within moments of it hatching. A good chicken sexer can sex more than 1400 chicks in an hour with 98% accuracy, yet, paradoxically, nobody can explain how it's done.

Simple testing can prevent most critical failures
- This summary of a paper analyzing the root cause of software failures is another one that I originally read years ago, but I keep coming back to. Here is the money quote: "Almost all catastrophic failures (48 in total – 92%) are the result of incorrect handling of non-fatal errors explicitly signalled in software."

The mysterious cause of stuttering in the brain
- MRI testing is showing scientists how the brains of people who stutter are wired differently. Imaging suggests that the Default Mode Network (DMN) is overly active in stutterers. In effect, the brain can be seen to be interrupting itself. With this understanding, pharmacological treatments may be on the horizon.

I was wrong. CRDTs are the future
- The algorithms that allow for multiple people to collaborate together in an application like Google Docs are critical as we rocket towards the future of online, distributed work environments. Operational transforms is the technology that has powered these tools up until 2020, but CRDTs enable collaboration with greater reliability and would allow future workers to retain ownership of their own data.

Reverse Engineering the source code of the BioNTech/Pfizer SARS-CoV-2 Vaccine
A runner-up entry this year is Things Unexpectedly Named After People, which needs no further summary. - The RNA vaccines that are being deployed to combat the coronavirus are a radical new technology that, 10 years ago, would have been impossible. Today we have the capability not only to understand the source code of a virus, but to print our own versions that can be used to train the immune system without making us sick.

Solutions and Other Problems
- Allie Brosh of Hyperbole and a Half is back after a seven-year absence with a new book. The new book doesn't deviate much from the patterns of the old, and the material may make you cry from laughter one page, and from sadness on the next.

Maximum Volume: The Life of Beatles Producer George Martin, The Early Years, 1926–1966
- One of my favourite articles from last year introduced me to the idea that when beginning to learn about a new field, it could be useful to read a biography of a famous person from the field as motivation. I was interested in learning more about the role of a music producer and, though I wasn't crazy about The Beatles in particular, I couldn't have picked a better place to start.

Cat Clyde
- Cat Clyde identifies themselves as a blues, roots, and folk band, which is a theme that has guided a lot of my listening again this year. All The Black, in particular, has managed to wedge itself into my brain in 2020.

Lee DeWyze
- I went back to watching The Walking Dead earlier this year, and season 4 introduced me to Blackbird Song from Lee DeWyze. DeWyze's folk and bluegrass style is a great fit for the post-apocalyptic Georgia setting.

Billie Eilish
- I'm a little late to the party on this one. As the winner of the 2020 Grammy for Album of the Year, I'm sure most listeners have caught on to Eilish's achievements by now. I remember the first time I heard bad guy; after the song ended, I sat in silence for a bit thinking about how I had never heard anything like that before.

Cyberpunk 2077
- After nearly a decade in development, Cyberpunk still had one of the rockiest launches of a AAA game in recent memory. Underneath the issues is a game filled with entertaining stories, hundreds of hours of content, and beautiful visuals. As the bugs are cleaned up, more people will be able to find enjoyment in it, and I think Cyberpunk will be remembered for years the way that Skyrim has been.

Half-Life: Alyx
- VR didn't take off as much as I had hoped it might back in 2012. While the hardware these days is capable of incredibly compelling experiences, the cost and lack of showcase games has certainly hurt adoption. The costs of hardware will likely keep VR from ever being mainstream, but with Alyx, VR now has the triple-A game it needs to show off the tech.

Bad North
In the theme of pared-back strategy games, I also recommend Into the Breach from my Best of 2018. - Bad North takes the micro-management elements of big real-time strategy games and distills it down to it's bare elements - 3 units, 2 abilities each - and pairs it with a similarly pared back visual and audio style. The Jotunn Edition on Steam adds a bit more content that, for me, is necessary to make it into a complete game.

Journey
I obliquely mentioned Penrose in my wrap-up last year - an interactive story that launched this year and is worth your attention. - Journey has long been held up by critics as one of the best games ever made. With its launch on PCs this summer, I decided it was time for me to set aside the 2 hours needed to play through it - after which, I turned around and immediately starting playing again. I waited too long to experience this game; don't make the same mistake as me.

Distributed
- Matt Mullenweg is the CEO of Automattic, the company that builds and operates Wordpress, and has a team of 1300 employees with no office. The podcast brings in top guests to discuss best practices in team and company management, but with a focus on the problems that come with remote work. With the explosion of employees working from home this year, insight into effective distributed work has become critical to a huge part of the workforce.

Supply Chain Logistics
- In 2020 I started a new job with a company working in the logistics industry. As a course, I didn't think this one was particularly well-executed. However, I was grateful to have these materials available for free and the class helped me understand the bigger picture of the work I do.

Roam
Between 2019 and 2020 I had really refined my practices around using physical notebooks for note-taking and to-do lists using methods from the bullet journal community, but as of the start of 2021 I have abandoned my physical notebook almost entirely, in favour of Roam. - Roam describes itself as a "note-taking tool for networked thought", but that description really undersells the value of it. It's as versatile as a notebook, pencil, and scissors, but with the advantages of search, tagging, interactivity, and bi-directional linking of thoughts. It's the first online note-taking software that I've found that feels like a 10x improvement over a bullet journal.

Read 3000 pages.
- Actual pages read: 724. Despite all the extra time I spent at home this year, I found I had little interest in sitting and reading books.

As the effects of the novel coronavirus started to be felt, I lost interest in a lot of projects or goals that were associated with social activities, and instead chose to spend my time on projects that were more introspective and affected my immediate environment.

Topics I'm thinking about at the start of 2021

What can individuals do about climate change?
- This has been on my mind for years, which has given me time to refine my thoughts on it. The short version is that I don't think individuals should be feeling guilty about not finding work in green tech, and the most important changes will come from putting pressure on politicians to adopt green platforms. But in order to develop green platforms, we can each look at the fields that we are already knowledgeable in and figure out how we can reduce energy usage in those fields.

What are the areas of music that I find most interesting?
- When I listen to music, I'll hop from genre to genre; from modern, synth-heavy dance music, to acoustic group performances inspired by the past. These different areas all require different skills, and I'd like to find the parts I enjoy most so that I can spend more time there.